The Royal Andalusian School of Equestrian Art Foundation, based in Jerez de la Frontera is known all over the world thanks to its show entitled “How the Andalusian Horses Dance”, a unique exhibition of horsemanship which both exhibits and summarises the work which the institution has carried out since its establishment.

In May 1973 his Majesty King Juan Carlos I – then Crown Prince of Spain – awarded Don Alvaro Domecq Romero the ‘Caballo de Oro’ (Golden Horse) trophy in Jerez de la Frontera. This is the most prestigious equestrian trophy awarded annually in Spain in recognition of dedication to, and work carried out in favour of, the horse. In honour of this award, Alvaro Domecq presented his show “How the Andalusian Horses Dance” for the very first time, such event representing the origin of our Foundation.

In its initial stage the School developed under the personal management of its creator. Later the Ministry of Information and Tourism decided to take charge, purchasing the ‘Recreo de Las Cadenas’ to this end from the Duke of Abrantes, and an arena was built by the architect José Luís Picardo, which could seat up to 1,600 spectators and had stable facilities for 60 horses.

In 1982 the ministry handed over the running of the School to a Governing Body, under the charge of the Cadiz Provincial Council, thus promoting the re-launch of the school at both a national and international level.

In 1983 the Governing Body purchased the School and after public tender the post of Technical Director was awarded to its creator and founder, D. Alvaro Domecq Romero. 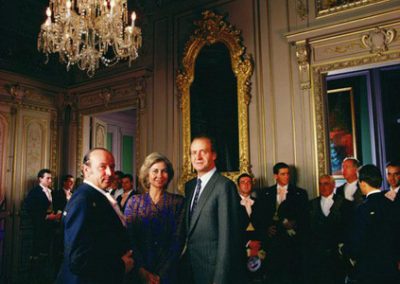 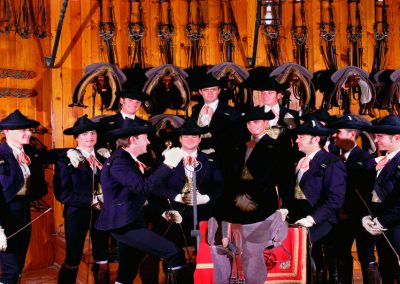 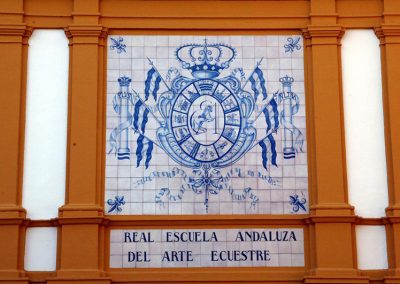 Since 1986 the Governing Body has surpassed even its most optimistic expectations, having been able to provide the Institution with all its economic, personnel and technical requirements. It was in this year that the School acquired the stables of Don Pedro Domecq de la Riva, which consisted of thirty-five Spanish breed horses and a wonderful collection of nineteen horse-drawn carriages and their corresponding harnesses, some dating back to 1730, along with saddles and embroidered clothes for both horses and coachmen, all pieces of incalculable historical value.

In June 1987 His Majesty the King received the members of the Governing Body in audience at the Zarzuela Palace, accepting the post of honorary President and conferring the title of ‘Royal School’ to the Institution. Since October 15th of the same year, Their Majesties King Juan Carlos and Queen Sofía have presided over the inaugural events from the Royal Box in the arena of the ‘Royal’ School Foundation.

Although apparently the show “How the Andalusian Horses Dance” is considered the maximum exponent of the School’s work, there are other aspects which are regarded as equally, or even more important, for the Institution.

Among these, we would like to highlight its role as a social and cultural vehicle for our equestrian heritage, the selection and promotion of horses, the training of Haute École riders, the preservation and promotion of Classical and Country Dressage (Doma Vaquera), maintaining the prestige of our horsemanship, the breed of our Spanish horses, our traditions and culture. Furthermore, the show enables the Royal School to play host to the Province of Cadiz and to act as ambassadors abroad on annual tours to different foreign countries.